A trip to Rome is said to be incomplete without tossing change into the Trevi Fountain. Sounds wishful! Not really on a winter’s day, when the coin is most likely to bounce off the frozen surface and strike some bystander in the eye.
So, on my last trip to Rome, fountains were out of the question. Instead, I chose to fight the cold and march to a place frequented by every Roman who lived a couple of millennia ago, the Flavian Amphitheatre or the Colosseum.
Walking through the seeming ice free streets was easy, but a random ice-filled crack on the pavement nearly slid me off balance. Cold apart, the crack and crevice speckled streets could have been any other part of South Asia, for most of the traders and tourist guides and artists seemed to be from the sub-continent, mainly from Bangladesh. 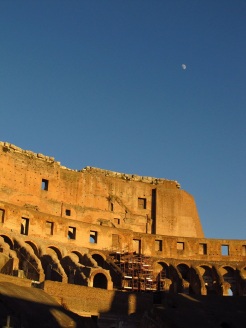 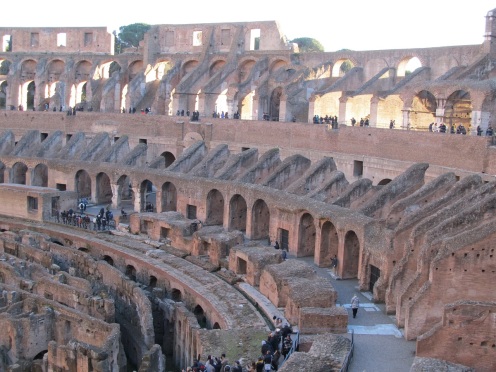 The Flavian Amphitheatre was called so because it was commissioned by the Flavian dynasty emperors who came after Emperor Nero. But the name apparently came from a statue of Nero that stood in the vicinity. The Statue was inspired by the Colossus of Rhodes, one of the Seven Wonders of the Ancient World. Expectedly, Nero posed in the similar stance and semblance of Helios, the sun God. Later, the infamous emperor’s successors moved the Colossal statue next to the Amphitheatre.

On entering the Colosseum also comes across the world’s once largest arena then called the harena, named after the sand spread there. A part of the stage has been rebuilt acting as a cross-section of the structure. Just underneath the arena, lay a framework of hypogeum that once flooded the centre stage with water for re-enactments of naval battles. After a few years of its opening in 80 A.D, vaulted corridors were installed that held the equipment needed for the games: weapons, machinery including winch-operated lifts for raising men, cages for animals, stage sets and other things. After the installation of the vaults, water shows became impossible for the new developments blocked the water flow.

Once upon a time, marble blocks sat coolly atop each other, lined with wooden planks, whist the commoners seated on them heated up with an increase in excitement in the gladiatorial fights. They cheered and booed their favorites, and the survivor could win their freedom. All the death was was all in the name of sport. I wonder what current day reality show will be frowned upon by our future generations?
The Colosseum started off as the centre stage of Roman life. It saw executions of the virtuous and the vile; converted from being a fight club to a chapel; later it was turned into a citadel and then a cemetery; and after eras of being vandalized and ravaged by people and time, it has again regained its position in the centre of Roman attractions. Life can be a full circle.
Whilst walking out of the Colosseum, I came across some tourists. I shook my head when they climbed a broken pillar to pose for pictures. If at that point, any fountain granted me a wish, I would have asked for the duck faced girl to crumble and fall just like the bricks she had braved; and I would wish that upon all the miscreants in the world.

p.s- It was time to chill my frozen heart in a bowl of gelato. 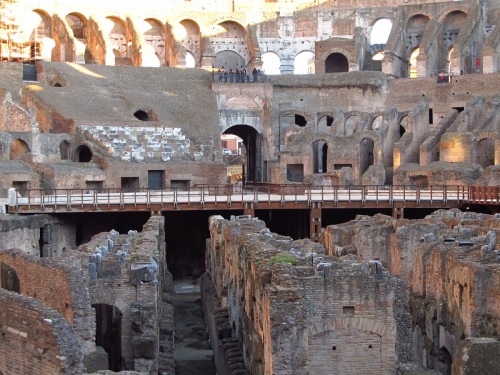 Cross-Section of the Arena  showing the Hypogeum

6 responses to “A Roman Stopover”