Lumbini, Touched by the Enlightened One

“We can keep your backpack in the dickey”, offered the conductor of the crowded mini-bus heading from Lumbini to Bhairawa. Any space was welcome in the can of sardines, so I obliged.

Gosh!  That is how tourists are mugged – it was pointless, my bag was gone. I said a little prayer. Thankfully, my passport and money was on me. My trip to Lumbini had been in a similar bus…a small price to pay for tranquillity.

The previous evening on checking into the Lumbini Lodge, I came across a man enjoying his evening drink. We got talking. He was a retired Nepalese Captian, who had served in the British Brigade of Gorkhas. He was full of stories.

He said that he was in the UK for training. At that time, supplies and toiletries became scarce. Thanks to the Oil Crisis, due to an embargo by OPEC (Organisation of the Petroleum Exporting Countries).

He spoke of the restroom of a reputed hotel; about a signage  stuck next to the toilet paper. “Use both-sides” He chuckled. “What was the fuss about? We just washed!” I wonder, where he found water next to a water closet of 1970s’ Britannia?

Mr.Captain was seventy-six but he did not look a day over fifty. He picked up his full glass, as if he was in a health drink advertisement from the television. “Whisky quarter a day keeps doctors at bay!”

My mother would disapprove of the efficacy of my new-found fountain of youth.

The night at the lodge was uneventfully quiet. Hence, the morning was apt for exploration of Lumbini.

Lumbini has been divided into three zones; Sacred Garden, Monastic Zone and New Lumbini Village. Numerous Madheshi villages were resettled to make space for the international project. Can uprooting of native people be an apt preamble for the any dedication to Buddha?

The Sacred Garden was circular and was surrounded by a moat. At the heart of the garden lay Maya Devi Temple that held the marker stone (exact birth place of Gautama Buddha). Around the temple were the ruins of ancient monasteries and stupas, destroyed by the Mughal rulers of neighbouring India.

The Monastic zone contained monasteries belonging to several nations, showcasing their cultures and traditions. The zone was divided into Eastern and Western parts. The East houses Theravada monasteries, while Mahayana monasteries were in the west.

The mini-bus had came to a halt.

A co-traveller reminded me that it was my stop. I was relieved to see my backpack.  On my walk to Bhairawa Airport, I thought of my experience at Maya Devi Temple.

No sooner had I entered the shrine than silence engulfed me. My thoughts became the only sound; never heard myself so lucidly. I felt goose bumps on my arms. My strides towards the marker stone felt light, as if I was walking on air.The moment, I was face to face with the marker stone, a sudden wave of compassion seized me.  Was it a divine presence or just the collective consciousness of believers? 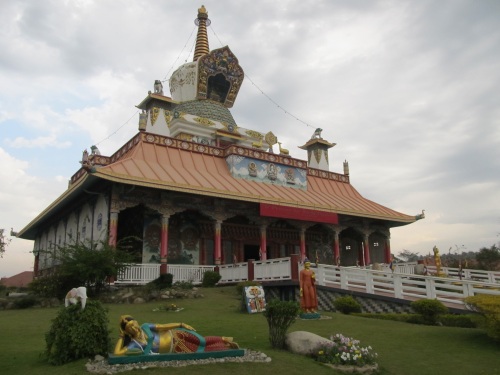 A Corridor in German Monastery

Burmese Monastery in the back ground

A Nilgai near Sacred Garden

9 responses to “Lumbini, Touched by the Enlightened One”