Loss of breath and creaking of the knees, that was what the faithful might have experienced. The 365 steps leading up to the temple was a challenge for the strong-hearted. Occasionally, macaques snatched bottles of water from the hands of careless ones – no wonder you were heading towards Monkey Temple. At the top of the flight was a huge Vajra (thunderbolt), a symbol of resilience and spiritual power.

We took the less scenic and touristic car-route from the southern entrance. I blame it on Thara, my high-heeled friend; otherwise, I was game for the arduous climb.

No sooner had we walked towards Swambhunath Stupa than a waft of incense and fumes of yak-butter lamps overwhelmed our senses. Spinning prayer wheels, reading Om Manee Padme Hum, circumnavigated the stupa. Fluttering prayer flags converged at the pinnacle of the dome, which was glistening in the evening sun.

Enormous eyes looked through us. We stared at the, Devanagari numerical one shaped, nose between them. These non-prejudiced, Buddha’s, features were present on all the four sides of the spire atop the stupa.

According to legends, the site was the spot where grew a radiant lotus. It later transformed into a stupa hence, it was called ‘Self-created’ or Swambhunath. The city of Kathmandu has grown around this site.No wonder this is one of the seven UNESCO World Heritage Sites in the Kathmandu valley.

Several smaller stupas and shrines surrounded the main structure. Beside the shrines, the complex also had a library and a monastery. A group of shops selling indigenous art works and Tibetan souvenirs, like Thanka paintings, yak bone jewellery, and more lined a corner of the temple complex. 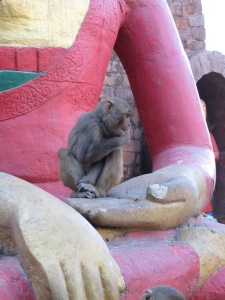 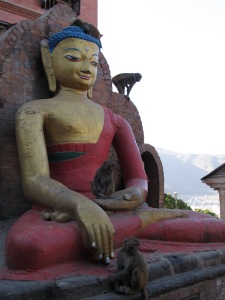 The stage is set.

A large Buddha statue sat on one corner of the complex. His left hand was on his lap. This hand held some food offerings, but not for long. Soon, a primate perched himself there for a quick bite and complimentary blessings. He was well prepared. He nibbled, ignored the camera-frenzy tourists, and then, with the corner of his eye scanned them for any potential snack or toy.

We saw a western couple along with their toddler sitting a few feet away from a juvenile monkey.  They were making hand gestures to the animal. “Do you realise, they are erratic”, I thought. As if the monkey was waiting for my telepathic instructions – he flared his canines at the toddler and scampered away. The child started crying. Don’t you just love today’s parents?

This symbol of Nepal displays a harmonious over-lapping of two faiths. For instance, Amitabha Buddha stands right next to the Hanuman, Hindu Monkey God. Both get equal adoration from the faithful.

Swambhunath is a profound experience. Moreover, the monkeys remind us of our evolutionary choices. After fulfilling our basal needs, it is our choice whether to strive towards self-actualisation or be stuck, monkeying around… 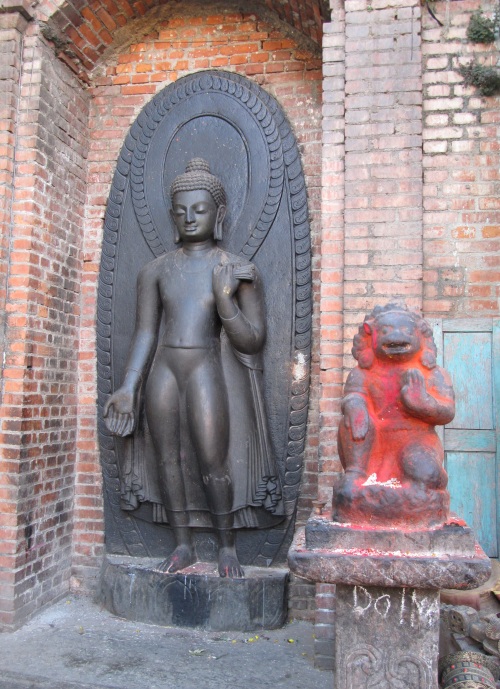 Buddha along with Hanuman at Swambhunath Temple

Children above a shop at Swambhunath Temple

11 responses to “Not Just Monkey Business!”